When Do We Boycott?

Over the past few days the airways have been filled with news about Starbucks.  If you haven’t been hiding away somewhere then you know that two African American men were arrested for trespassing in a Philadelphia store, though they had committed no act other than to be sitting and waiting for a friend to meet them.  The incident was outrageous, and so, not surprisingly, outrage followed, including people calling for a boycott of the chain’s stores.

The pain and anger resulting from this instance was completely understandable and justified.  How many times over the past few years have we watched videos of African Americans being treated unjustly, brutally, and even mortally?  The repeated nature of these incidents, and the dark strain of American racism that they consistently reveal, is as worthy of outrage as anything I can think of.

The incident, and the emotional impact of it, has raised the question of whether people should boycott Starbucks in response to this incident

Whether somebody choses to boycott a person, business, or other kind of organization is, of course, matter of free choice.  Anybody is free to avoid working with any person or organization or buying their products or services.  However, the question I’d like to ponder is, when do we boycott

The word itself comes from an incident in Ireland in 1880 when a land agent, Charles Boycott, evicted people who couldn’t pay rent on the land he owned and was shunned by his community.  However, the act of boycotting is in the very soul of our country

Perhaps the original American boycott was the Boston Tea Party.  Over the years it has become an often used tool for protest or retribution against perceived offenses.  One of the more famous was the 1955-56 Montgomery Bus Boycott, seen often as the birth of the modern Civil Rights movement, but it was by no means the last.  From 1965-69, the United Farm Workers Union, led by Cesar Chavez, boycotted the poor treatment of their members and the denial of their right to organize, resulting in 14 million Americans refusing to buy grapes and the ultimate certification of the union.  In 2003, many supporters of President George W. Bush boycotted the Dixie Chicks, after lead singer Natalie Maynes criticized the Invasion of Iraq.  In 2012, Chic-Fil-A was boycotted in protest of the anti-LGBT policies of the organization and its founder.  More recently Fox News personality Laura Ingraham was boycotted in reaction to her on-air bullying of Margery Stoneham Douglas High School survivor, David Hogg

These boycotts were generally seen as successful in accomplishing the aims of the boycotters.  There were dozens of other attempts that were less so.  In 1980, the United States boycotted the Moscow Olympic Games, in reaction to the Soviet invasion of Afghanistan, a move largely seen as having little impact other than denying U.S. athletes the opportunity to compete

Boycotting, whether we agree with the target or not, has generally been seen as a peaceful expression of our rights to free speech, free assembly, and protest.

The proposed Starbucks boycott is an interesting case, because while there is no question that the incident happened, Starbucks has been seen as an organization that takes diversity seriously, and works hard at it.  I’m sure many remember the company’s 2014 response to the shooting of Michael Brown in Ferguson, Missouri by attempting to encourage racial dialogue through their somewhat ill-fated “Race Together” program.  They have taken strong public stances, even in the face of boycotts, in support of LGBT rights.  Most people believe that the company’s CEO, Kevin Johnson, has responded very positively to the incident, both in statements and action, and yet many others still believe a boycott is in order

It is always challenging to identify the true source of a “diversity emergency” like this.  Dr. Edwards Demming, the quality guru, made an important distinction between “special case” problems and “common case” problems.  Special case problems are generally those that aberrations, often by an individual or groups of individuals, but don’t reflect an organization’s general intentions.  Common case problems are generally more systemic.  Treating common case problems with special case responses can be futile.  If each case is dealt with as if it is unique when in fact it is systemic, it results in endless frustrating interventions.  On the other hand when special case problems are addressed with common case responses they can cause more problems than solutions because they may undo a lot of things that are working in the effort to address the few cases when they’re not

In all transparency, I have worked with Starbucks in the past.  That being said, this incident, insofar as we know now, strikes me as a special case problem.  Starbucks has been working toward creating a culture of diversity and inclusion for several years.  While they still have a ways to go, their intention is clear.  Yet, they are a company with over 27,000 stores and 250,000 employees.  Given the nature of all human beings to have bias, the chance that a quarter of a million people would not have any incidents like this is virtually impossible.  Boycotting in this case may not be called for

I certainly am not claiming to have the answer to this dilemma, and I respect the right of anybody to choose where they buy their coffee, or anything else.   But I recall working on the Grape boycott in my teens.  Had the opportunity to spend a day being trained by Saul Alinsky, the great labor organizer.  Alinsky taught us to always choose “pragmatic idealism” and never to let our emotional reactions cause us to forget that our purpose was to “move the needle.”  It seems to me that, in this case, calling for a boycott is premature.  The more pragmatic may be to wait and see how the company responds to the challenge it now faces.

Should Starbucks Be Boycotted?

“I definitely do not think Starbucks should be boycotted.  I think that their response was amazing.  We need to use these situations as opportunities to learn and to have more authentic dialogue.”                   — Mary-Frances Winters, President & CEO, The Winters Group, Inc.

By Brittany Harris, The Winters Group 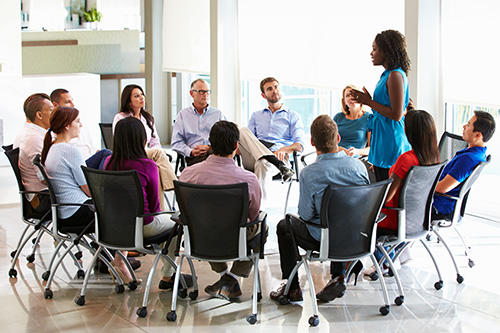 There is no shortage of studies and articles that suggest diversity training is ineffective and simply doesn’t work. In a recent Harvard Business Review article, Frank Dobbin and Alexandra Kalev cited several ways diversity trainings fail to yield a return on the investment. First, the positive effects are not sustainable, typically lasting a day or two. Second, diversity trainings tend to send negative messages, thereby causing adverse perceptions among leaders and employees who engage. And third, even when mandated, diversity trainings do not improve the representation of women and people of color in management.

Certainly, there is some validity behind Dobbin and Kalev’s findings regarding traditional approaches to diversity trainings. However, in our experience we have seen some success. This week, we share another factor that contributes to diversity and inclusion programs that succeed: a developmental approach to training and learning.

At The Winters Group, our philosophy is to educate rather than train. Training efforts are typically designed as one-time events, with a focus on tolerance and sensitivity and perhaps a small amount of skill building. Whether the training is for one day or one week, a single event is not likely to yield the desired result.

There are myriad controversial subjects that can only get surface coverage. Without opportunity to fully examine one’s own beliefs and values, and then have the opportunity to apply, practice, and internalize the concepts through the trial and error of triple loop reflective learning, little sustained change will occur. Once the training event is over, employees go back to their work environments, either positively or negatively charged, with incomplete knowledge and little understanding about what will be different. Soon, it is business as usual and the diversity training becomes a vague memory. This is often time the case with one-size-fits all approaches to traditional diversity training.

The Winters Group uses the Intercultural Development Inventory (IDI) to assess individual and organizational cross-cultural competence. By definition, cross-cultural competence is the ability to discern differences in one’s own and other cultures and to be able to develop mutually adaptive solutions that take various worldviews into account. The IDI is a measure of the capability of the organization to effect change related to diversity and inclusion. The tool also supports in understanding where to target training, and how to support individuals in their learning journey. We have found that the more we know and understand about how individuals operate across differences, the more effective we are in developing sustainable and meaningful solutions.

Diversity training will only be as effective as the level of investment and commitment made to truly engaging and shifting worldviews. Successful programs require diversity and inclusion practitioners and leaders move beyond a one-size-fits all approach to training and towards a model that supports developmental and ongoing learning.

Welcome to the Inclusion Allies Coalition Forum. We are a coalition of organizations and practitioners committed to diversity, equity and inclusion within our organizations and society. We provide resources, advocacy, conferences and webinars for dialogues across differences to promote inclusion. We serve as allies for those who feel marginalized and advocates for inclusive policies and practices.